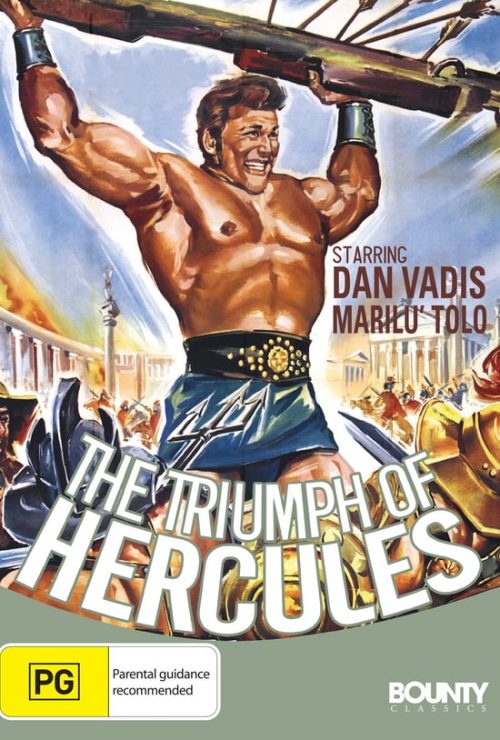 Triumph of Hercules from Bounty Films on Vimeo.

Dan Vadis plays a very husky, somewhat headstrong Hercules (closer to some aspects of the legend than many other portrayals) in this sword-and-sandal adventure tale, which combines elements from several legends and two interesting twists involving magic. The king of Mycene is murdered by his army commander, Milo (Pierre Cressoy), who seizes power and vows to marry the king’s daughter, thus solidifying his rule. The king’s dying words send his loyal subjects in search of Hercules, who helps lead an uprising, but Milo has a weapon of his own, given to him by his sorceress mother, a magic dagger that conjures up seven metal warriors who can slay anything in their path. When Hercules bests them in battle, Milo goads him into killing an innocent man, which causes his father, Jove, the king of the gods, to strip him of his god-like strength. It is a mortal but still very powerful Hercules who is captured and must defend the life of the princess (Marilu Tolo) from a horrible death planned by Milo. The denouement is surprisingly similar to that of Terminator 2, with Hercules having to figure out which woman is the princess and which is her enchanted imposter. The script also works in some unusual comic relief as Hercules goes hand-to-hand with the metal-skinned guards, pounding away with weapons that would be unthinkable to use on men, all to a certain humorous effect. Also, part of the plot involves a pair of appealing thieves and pickpockets who are not beneath helping the rebels, thus adding an odd wrinkle or two to the plot where the magic dagger is concerned.