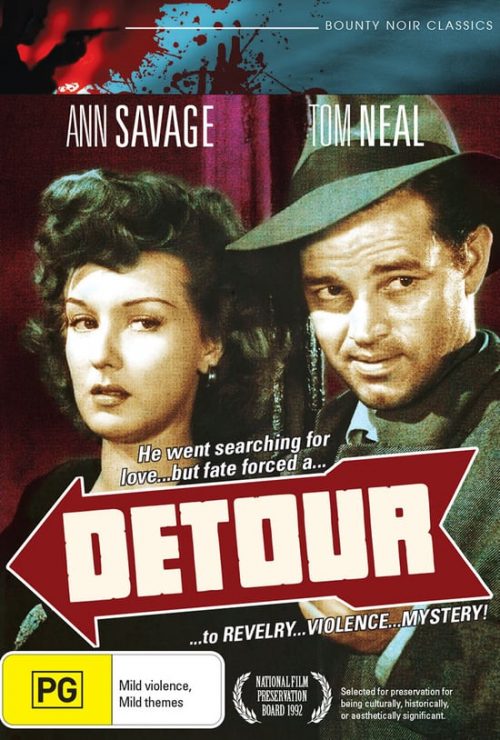 Detour, called by many the ultimate “film noir,” made on a shoe-string budget, and utilizing “night-for-night cinematography, creates a bleak, uncompromising, pessimistic nightmare world where its inhabitants can expect neither mercy, sympathy or justice. Al Roberts (Tom Neal) is the piano player in a sleazy New York nightclub. Sue (Claudia Drake) his girlfriend seeking stardom, leaves for Hollywood. Al follows, hitching a ride with a talkative, drug-addicted businessman who mysteriously dies during the trip. Al, frightened that he will be blamed for the death, hides the body in a ditch and assumes the businessman’s identity. Needing company, Al picks up Vera (Ann Savage), a fellow hitchhiker who knows of Al’s deception. Vera, hostile, agressive and with an annoying, nagging voice might be one of the most unbearably unpleasant female characters in a genre which celebrates wicked women. She blackmails Al, leading to one of the most memorable death scenes in film history. Directer Edgar G. Ulmer, limited to a six day shooting schedule, while crude and lacking in finesse, succeeds in creating a memorable, dark, nightmare world, uncaring, cynical and brutal. Detour is a bleak gem which has gained well-deserved cult status.

“It lives on, haunting and creepy, an embodiment of the guilty soul of film noir. No one who has seen it has easily forgotten it.” – Roger Ebert