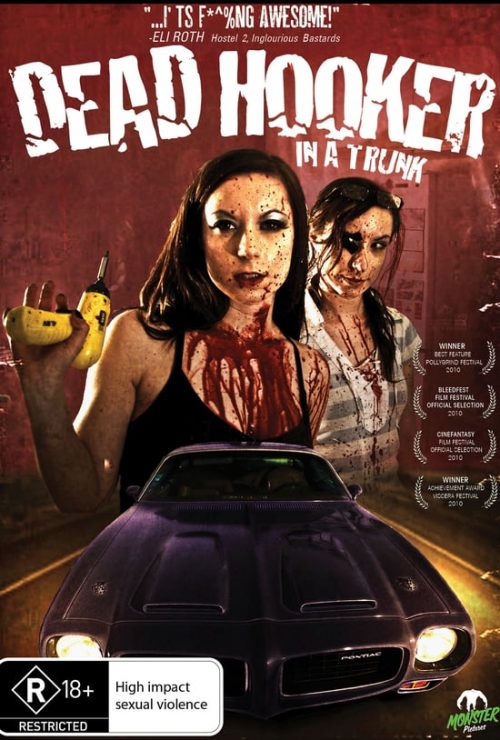 Dead Hooker in a Trunk (VOD)

Dead Hooker in a Trunk from Bounty Films on Vimeo.

“Set in beautiful Vancouver, four friends set out on an everyday errand and end up in a fight for their lives when they discover the body of a dead hooker left in their trunk.” Lead by a sexy, impulsive Badass (Sylvia Soska), her distant Geek twin sister (Jen Soska), their bible thumping, Jesus loving Goody Two Shoes friend (CJ Wallis), and a chaotic, rockstar Junkie pal (Rikki Gagne), the group has to put aside their differences to dispose of the body before they’re next. Thrown into their own personal purgatory, they face off against persistent police, a sleazy motel manager, chainsaw wielding triads, and a brutal serial killer. All the while they are followed by a mysterious Cowboy Pimp (John Tench) who wants to claim the corpse for his own. Will they uncover the truth behind the body and be able to stand up to their demons? Buckle up and get ready for the ride of your life filled with gun fights, extreme violence, blood, guts, gore, and goats! Dead Hooker In A Trunk is the unexpected first feature film written and directed by identical twin sisters, Jen and Sylvia Soska. The newcomers created an impossible film that is an underground sensation, destined to be a cult classic and will make you fall in love with films again!

“A grimy slice of low-budget depravity that’s as entertaining as it is completely ridiculous.” – Cinematical