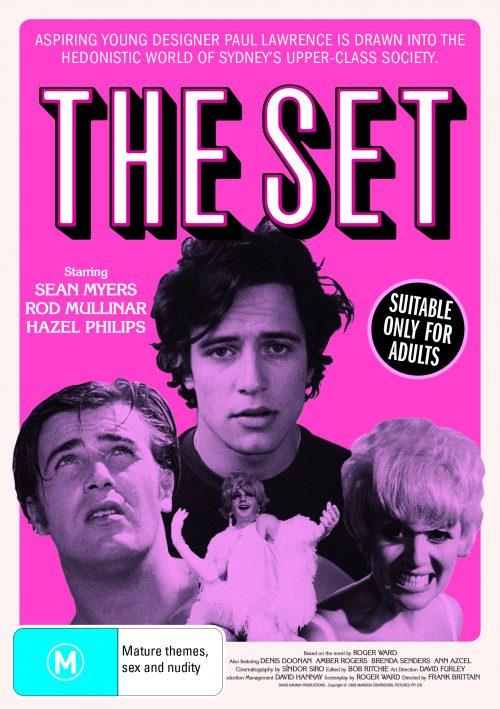 Reeling from his girlfriend’s sexual past, the sensitive Paul Lawrence (SEAN MYERS, Stork) runs off to Sydney in the hopes of attending art school. What he signs up to instead would end up shocking the nation! Paul becomes the protégé of decadent designer Marie Rosefield (BRENDA SENDERS, The Girl From Tomorrow) and through her, enters THE SET, the sensual and seductive world of the Sydney art scene.

Swimming through this utopia of flamboyant men, camp queens and fierce sissies, Paul quickly begins exploring his own sexuality. Commissioned to work to a top stage director, he succumbs to the charms of the handsome Tony Brown (ROD MULLINAR, Breaker Morant), who is also going out with Paul’s cousin, Kim (BRONWYN BARBER). Although love finds a way through this thorny predicament, things soon turn violent for the young artist. Paul’s not the only one having a sexual awakening though. Elsewhere, his Aunty Peg (Logie award winner, HAZEL PHILLIPS), bored with her husband, is on the hunt for a BIG BROWN BOY, and she’ll do anything to quench her thirst!

Based on the novel by iconic Australian actor, ROGER WARD (Max Mad), THE SET shocked and thrilled Australian audiences upon its initial release with its frank depiction of sex and nudity. More than just titillation, THE SET challenged traditional notions of sexuality and gender, and depicted a progressive Australia where same-sex relationships were considered equal.

Although a box office success, THE SET was a critical failure and fell into obscurity for 50 years! Until now… Bounty Films is extremely proud to bring this important film screaming back into the public conscience via VOD and a deluxe 2-disc release packed with HOURS of bonus content, including Roger Ward’s original novel