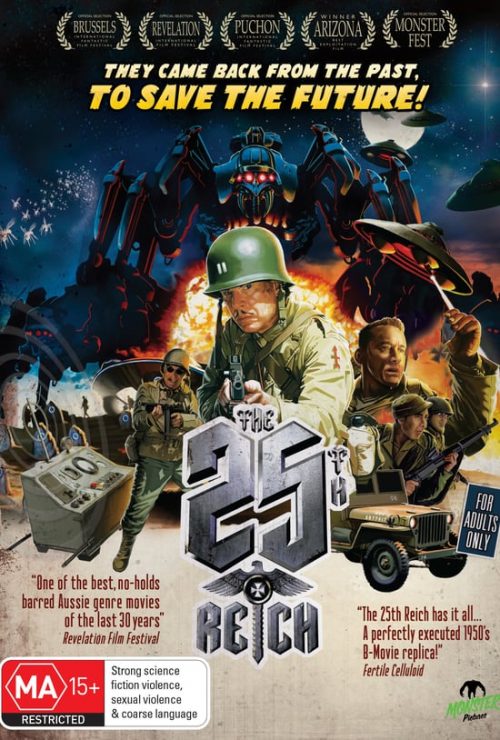 The 25th Reich from Bounty Films on Vimeo.

Okay, what if we told you we had an Aussie film that was set during WW2, involved multi-dimensional time travel, giant marsupials, vicious mosquitos the size of birds, and deadly robotic Nazi’s? You’d be salivating with anticipation, right? Well that’s exactly what you’ll get with THE 25th REICH, perhaps the coolest and funniest genre flick to emerge from this country in years – maybe ever! 1943, a team of American soldiers are sent into the Australian outback on a secret mission, toting a large wooden box – what’s in the box? A time machine OF COURSE! Suddenly they are whipped through time, traversing more than ten thousand years, where they are greeted by deadly MEGA-fauna before thrusting back in time, to the realm of the most evil 25th REICH!

“Giant Nazi robot spiders and a swarm of giant mosquitoes are two of the classic sci-fi B movie elements given a new run in this throwback from Aussie filmmaker Stephen Amis, who clearly loves the genre.” – Urban Cinefile