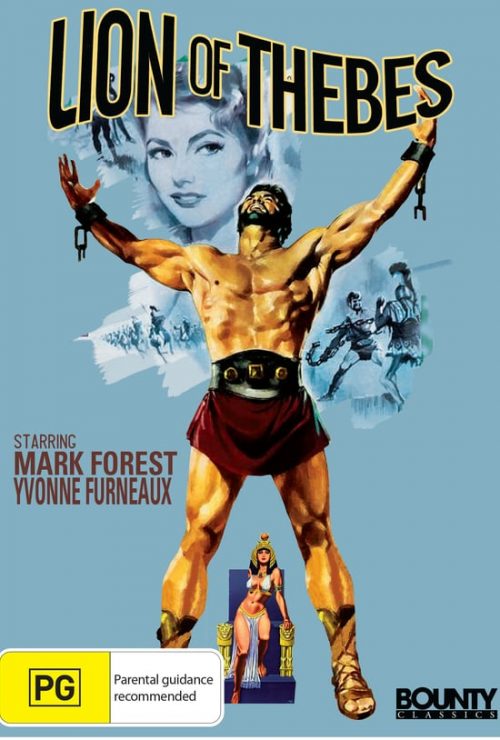 The Lion of Thebes (VOD)

The Lion of Thebes from Bounty Films on Vimeo.

This is an interesting entry in the Italian muscleman genre of the early ’60s. Set in the wake of the destruction of Troy, Lion of Thebes tells of Helen’s flight from the vengeance of the Greeks, in the company of her loyal protector Arion (Mark Forest). She falls into the hands of the pharaoh Ramses, who sits on the throne of Thebes and is opposed by the aging pharaoh Menophis. Ramses plans to marry Helen, but he is murdered by his jealous councilor. Arion must save her life when she is accused of the murder and sentenced to death. The plot intricacies intersect with elements of Land of the Pharaohs, with its court intrigue and treachery, but the presence of Forest adds an element of excitement to go with the exoticism of the settings and story, with his taciturn demeanor and always-at-the-ready muscleman heroics. Also interesting is Yvonne Furneaux’s portrayal of Helen as a woman who genuinely regrets her beauty and the mistakes to which it has driven men, as well as King Menelaus as a man torn by vengeful passion and greed.