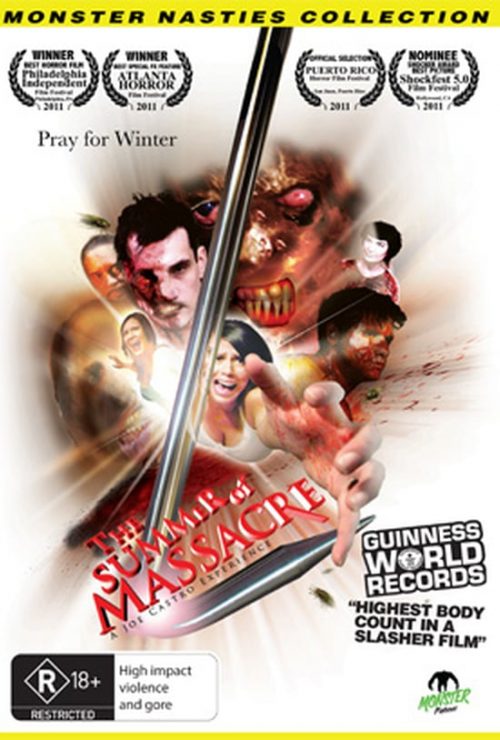 Summer of Massacre from Bounty Films on Vimeo.

Director-Writer, Joe Castro (Terror Toons 1&2, The Jackhammer Massacre) introduces another original tale — the first anthology slasher film which presents eight killers in 5 gorefest tales. Featuring Brinke Stevens (Slumber Party Massacre), Nick Principe (Laid to Rest), and Cleve Hall (Nightmare), plus a never before recorded gore epic body count with more than 150 onscreen deaths. Ungodly brutal beatings turns Chris, a young man, into a fiend that sets off a bloody, like never before seen, rampage. Beauty is truly only skin deep – Watch a young paraplegic, whose body is also wrecked with spinal bifida, fight for her life as her older, beautiful sister tries to murder her. It s been 36 years since Jesse s loving mother was raped by his biological father. Now, after hiding and running their entire lives in fear of this murderous rapist — He has found them! A group of Christian teenagers are stalked, maimed and burned by a local legend in a haunted forest. Three legendary serial killers terrorize downtown Los Angeles by murdering countless innocent souls and the killer plan is to go out with a real bang. There s nothing like the sweltering heat of summer to set off a massacre. The Summer of Massacre is a 100 mph slasher ride that never slows down and is packed with enough gore and insanity to send you looking for your barf bag.