Kitosh, the Man who came from the North – Bounty Films Skip to main content
Close Search
View cart “The Three Stooges Volume 8” has been added to your cart. 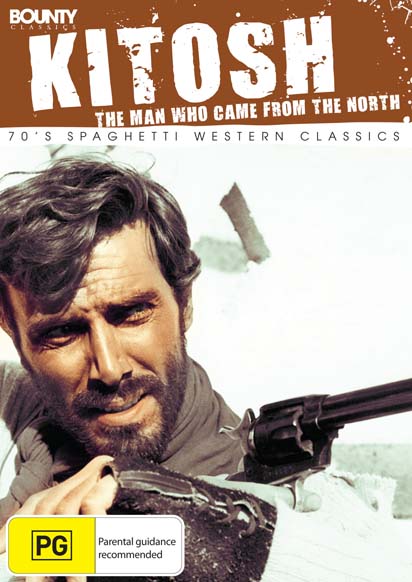 Kitosh, the Man who came from the North

Internal Politics and an illicit dalliance with an Indian chiefs wife force mountie David Kitosh on a daredevil mission leading five widows and five coffins filled with almost one million dollars worth of gold bullion across the Canadian countryside.Hounded at every turn by vengeful indians and a band of vicious outlaws and cutthroats after the gold, Kitosh and party heave a sigh of relief when they spot their destination, the secluded Fort Eagles.Unfortunately for the convoy, the safety of the fort is but an illusion as they draw closer to the daunting walls they discover the horrifying truth. Only dead men garrison the outpost, its inhabitants slaughtered to the last man, woman and child, the air thick with the stench of death and decay. A bloody reminder of what fate awaits them should they be caught by those chasing them. Brutal, thrilling and brilliant, Kitosh – The Man Who CAme FromThe North is a stellar Spagetti Western directed with skill and panache by Italian auteurJose Luis Merino, who’s credits rival those of the genre greats like Sergio Leone and Sergio Corbucci. A film you won’t want to miss. …Kitosch, the Man Who Came from the North