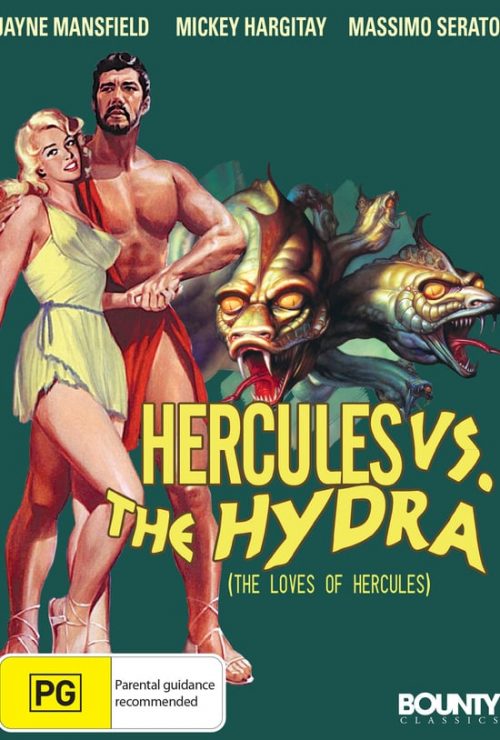 Hercules Vs The Hydra (VOD)

Hercules Vs The Hydra from Bounty Films on Vimeo.

This was one of the earlier movies to follow from Italy in the wake of the success of Hercules starring Steve Reeves, and marked an attempt to add some star power to the notion of a mucleman movie, not so much in the title role as the female lead. Mickey Hargitay, a body-builder, plays the Greek hero, while his then-wife, Jayne Mansfield, then one of Hollywood’s reigning sex queens, has two roles in the film. Hercules learns of the murder of his wife and seeks vengeance, only to learn that the kingdom from which the murderers came is besieged from within, by a usurper to the throne. Jayne Mansfield portrays the king’s daughter, who sympathizes with Hercules and opposes the usurper; she and Hercules are parted when he is wounded battling a three-headed dragon and given aid by a group of Amazons, who bring him to their queen (also played by Mansfield). She proceeds to woo the strongman, not knowing that she has a unique way of terminating her relationships — transforming her lovers into trees. Hercules manages to escape with his life while the queen is done in by one of her victims. He eventually returns to free the princess and her kingdom.